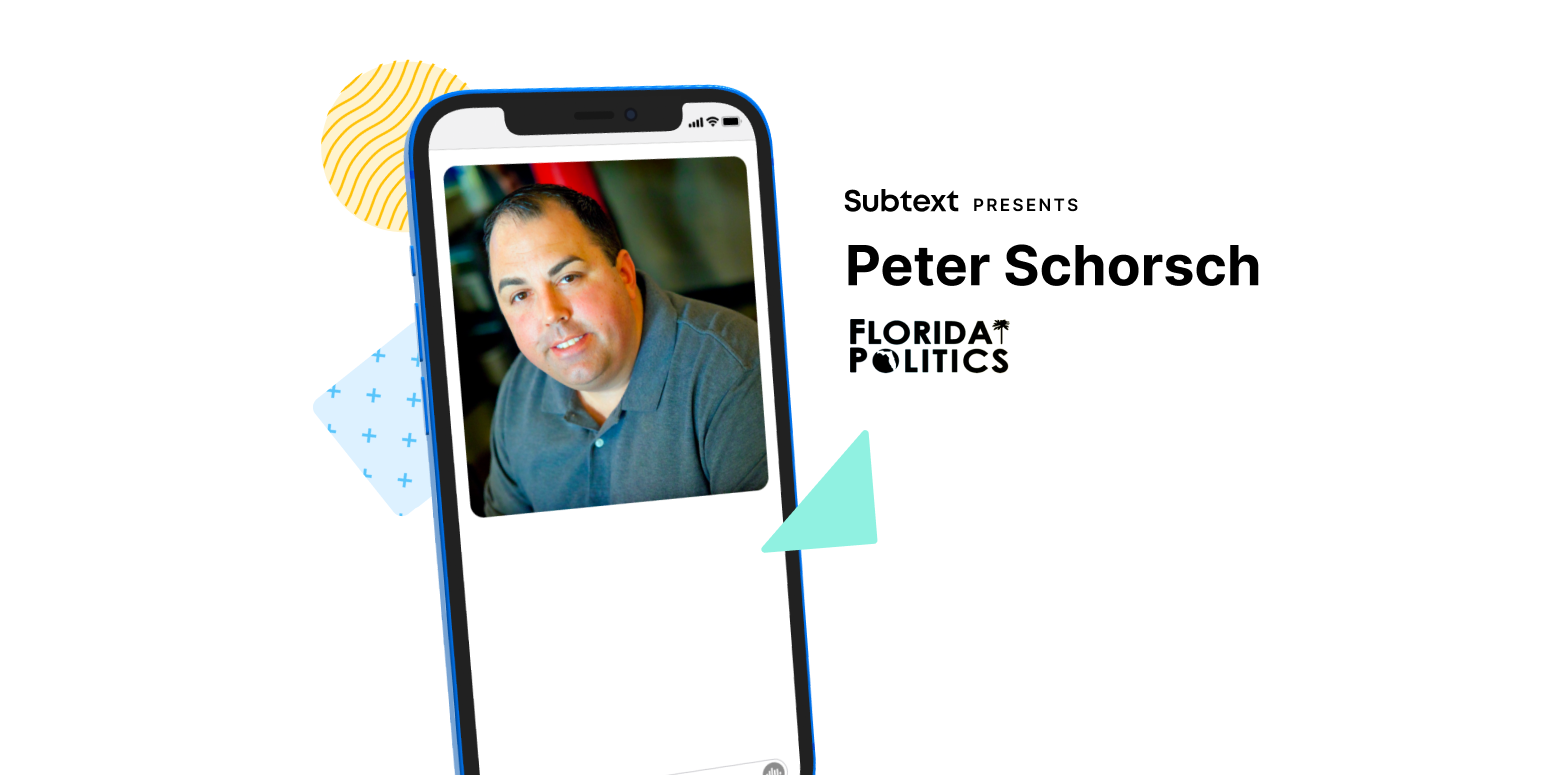 At Subtext we're fortunate to work with amazing partners across media, sports, entertainment, events, politics and more. We love learning from our partners to highlight the great work they're doing and to improve our own offerings. With that in mind, please check out this week's Q&A with the Publisher of FloridaPolitics.com, Peter Schorsch discussing their text campaign.

Q: Tell us about FloridaPolitics.com

A: FloridaPolitics.com is a state-wide digital first publishing company. We hyper cover Florida politics. We assume our audience are political aficionados, have an interest in politics and Florida politics particularly. We focus on campaigns and elections. We cover as many as 120 to 150 campaigns at the primary or general election level from statewide to county commission races. We have about two dozen content creators and about half are professional journalists and the others are writers, photographers, cartoonists, etc.

We’re probably best known for our suite of newsletters of which we have several. We have "Sunburn" and "Last Call" which are the Bible of Florida politics. They go out at 4am and 6pm each day. It’s what Florida politics insiders start and end their day with.

We are good at being multi-platform. We’ve gone from being just a blog to being a full operation. And as you know, we’ve added Subtext. In fact, we just submitted an entry for an award around the use of multiple platforms to tell stories and I was highlighting how we use Subtext to stay intimately involved with a group of really devoted readers.

Q: How did you find Subtext? What was the initial value proposition to you at the time?

I saw a competitor using it. The Tampa Bay Times, and I thought we could do better. The way they were using it wasn't what political junkies would want.

What struck me about Subtext is that the audience is willing to let you send texts to their phone. This is not passively reading a website. If you’re giving me permission to text you when I have something important to tell you, that’s a big thing.

We realized that we need to get our stories to the political junkies and the professional political class but that even email isn't fast enough for them all of the time. They don't want to wait for an email. They want something rapid fire and intimate and I thought with Subtext, we can do this!

We save the juiciest stuff and the first look at news we’re publishing for them [the text audience]. My scoops, I save that for the text subscribers. I remember a Sunday night we had a bombshell with a Chief of Staff stepping down and the text subscribers got the info earlier than anybody else! They got it before Twitter. We sent it on Twitter next and then obviously we did a full story. But I wanted that audience to have it first. As soon as I have a good scoop, I’ll send it to the text.

When it's the legislative session there’s no way to get the info out quick enough. By the time a newspaper reader is getting it, they’re getting the summary. We are doing it in real time through text. Nobody had ever come that close to it in real time, not even Twitter. People were saying “the text service is the best thing you do,” “I live for the text service,” it's been great.

Q: You make money from your text channel via sponsored texts. Can you tell us how this started and how it's working out?

Yes, we sell text sponsorships. We basically reserve the last 50 characters of a text for something like "This update is powered by lobbying firm X" and we sell 8 slots where people can sponsor the text messages. They do not know what text they're sponsoring and we rotate them around. So every 8 texts you get your sponsor message, but you don't know what the info will be that you're sponsoring.

I also started occasionally using that style ['this update powered by X'] to do some funny political insider jokes at the end of texts. They are jokes that only political wonks would get, and they love it. It was wildly successful in both legislative sessions and keeps people reading the sponsored messages.

For us it's not about the size of the audience. It's a lucrative market, it's like owning a Mercedes dealership. How do you get in front of lawmakers and big donors? I've got a track record of using new products to do that. So I reached out to people that had been with me before and explained I had a text service and I'm gonna drop 3-4 of the biggest stories a week there and people are going to want it and you can be associated with it.

By the time we're done paying the reporter and overhead costs, we make about 10-15 thousand a year for the business as well. I've had two reporters develop for this role and they've had to learn to write for text, but we make the money back. You do that 20 times and you’ve got a newsroom.

I'm always pushing my team "is that textable" or asking "do you have a text." I look for 5 tool players who can write, write for speed, write for social, can they speak on panels, etc. That part on social media, we have two of them that have developed a really good voice on text. As the journalism world tries to figure out how to make money and to do things, some people are going to adapt to it and they will learn text. And there will be some reporters that are not going to get the brevity of all.

Q: Has there been anything else that’s surprised you about Subtext?

I will say the intimacy is really good. I'm now able to fish for information. I had a scoop today about the Florida Dept. of Law Enforcement Executive Director who resigned. I had the story but not all the details, so I put out a Subtext that I was 'hearing' about it and asked 'what are you all hearing'  and I’ll get responses. I can do information gathering and source development. They are doing a bit of a trade and often asking to get more information from me as well. Which means they are getting involved. I tell people it's like a NY City Subway, if you see something, say something.

Q: How have you marketed your texting channel? What’s been the most successful here?

We know we’re not trying to go beyond Florida and we focus on the 50k people involved in Florida politics and maybe 200k that are curious. So when you start with that framework, we leverage it in different places where we've already found that audience. In our newsletters we tell people where to sign up. In fact we kind of joke with it "Need more Schorsch? If you love the newsletters, you'll love the texts."

We also highlight that we break the news on text first. "You're not going to get anything else from us until the next newsletter unless.... Here’s a way to get more intel, that kind of stuff. We leverage the newsletter and see if people want just a little more dessert. And we tout it on Twitter again as the place to get things first and be more intimate with the source of information.

To learn more about how to launch your own text community, click Become a Host above or reach out at hello@joinsubtext.com.

Tags: Use Cases, Why Subtext?
Back to Blog

By now, it’s an old joke. Journalists on Twitter, tweeting media analysis for an audience of other...
Read More