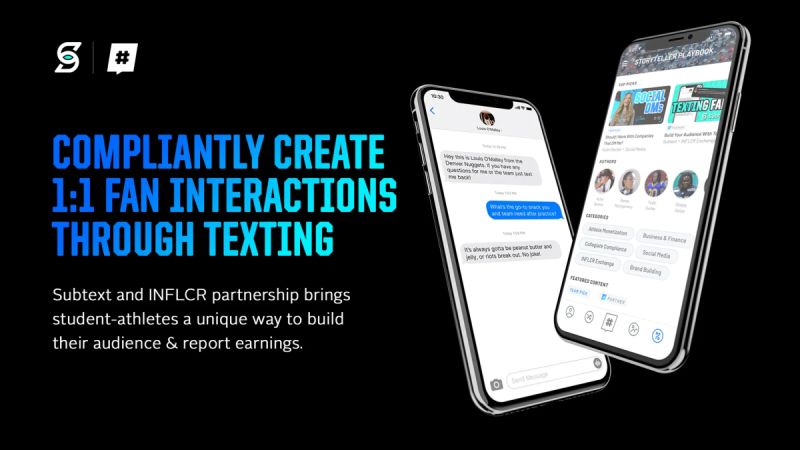 Kennedy Brooks, a running back for the Oklahoma Sooners, recently announced that he will begin texting his fans. His campaign, Chopping it up with Kennedy, is a part of a recent  partnership between Subtext and athlete brand-building platform, INFLCR. INFLCR’s  network of more than 45,000 student-athletes now have access to Subtext’s platform.

Changes in NCAA name, image and likeness (NIL) standards mean that college athletes can now monetize and build their brand. Jim Cavale, founder and CEO of INFLCR, has been helping athletes like Kennedy build and engage an audience on social media and this recent partnership gives them another way to do just that.

“Athletes building and engaging an audience on social media has been at the core of INFLCR’s mission from the outset. As we’ve seen through the early days of NIL, there are new, creative ways for athletes to engage with that audience. Subtext is a perfect example of that. This partnership gives INFLCR athletes a compliant way to earn income right from their phone through text conversations with their fans,” Cavale said.

Social media has its limitations and can be time consuming. Kennedy and other student-athletes can create an insider experience for their fans on their own time with Subtext.

Mike Donoghue, co-founder and CEO of Subtext says that texting empowers athletes to create a safe monetization stream that they can control and take with them after college.

“Instead of renting their relationship with fans from the social platforms, athletes can use Subtext to build income and community without compromise. We’re honored to partner with INFLCR to empower student-athletes and provide a way for them to build value in their brands by making direct connections with their supporters during their college careers and beyond,” Donoghue says.

Interested in texting your fans? Reach out for a demo at hello@joinsubtext.com.

Tags: Partnership announcement
Back to Blog

Back to School with Subtext