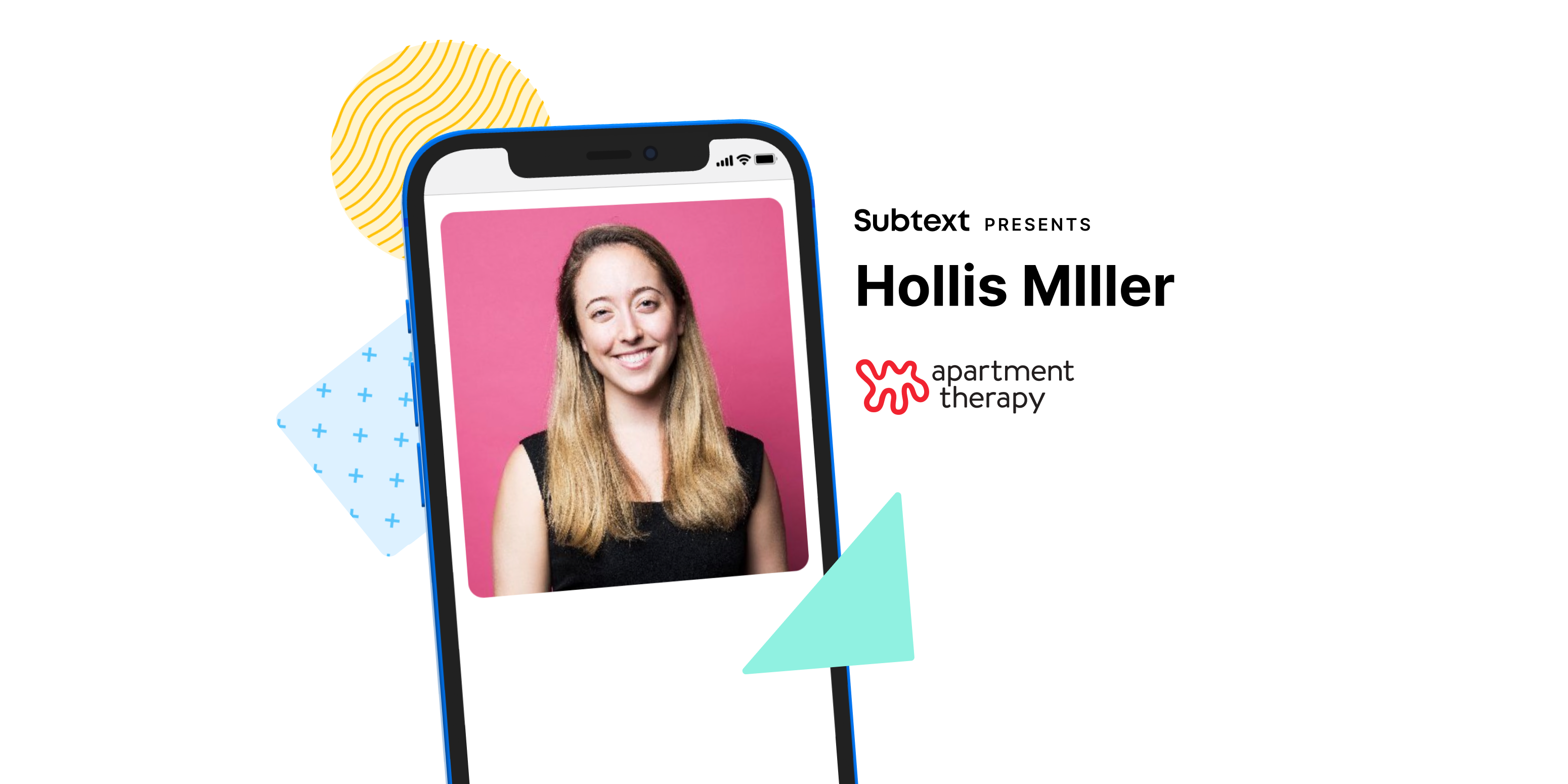 At Subtext, we're fortunate to work with amazing partners across media, sports, entertainment, events, politics, and more. We love learning from our partners to highlight the great work they're doing and to improve our own offerings. With that in mind, please check out this  Q&A with Apartment Therapy's Hollis Miller, discussing their Small Cool NYC texting event.

Q: Can you tell us about Apartment Therapy and how you found Subtext?

In terms of how we got started texting, we found Subtext amid the competitors and we chatted with the team and really liked what you were doing. So we signed up just this spring and have launched only one program so far, which was for our Small/Cool New York event. [Update: They've since launched a food campaign with Kitchn which is HIGHLY recommended!].

Q: So, tell me about the "Small/Cool Apartment" text campaign.
A: Many years ago, Apartment Therapy started doing something called "Small/Cool." It started as a contest about the smallest, coolest spaces around the world. In the last few years, we've branched out into having an event as well. This year we were able to have it in person in New York. It's a weekly event we hosted in April and May in a 120-square-foot space that we had carved out. 12 designers choose a different trend of the year and design a room based on that trend. Each designer got to use the space as they wanted, and then people could come in and actually see it and meet the designers.

Q: And how did texting get involved?
A: Subtext was a great way for us to reach out and remind users of when they were supposed to come in, check to make sure they were still able to attend, and more. After the event, we used Subtext to send a survey to get feedback, find out what they liked, and just go over the event with them.
We've also sent general updates for Small/Cool to the group as well. In the past, we had an email list where we would keep people updated and now we're doing that through text as well.
Q: What was your takeaway of the texting experience?
A:  I felt like it was really useful. We got a lot more responses which was something that we are really looking for, especially for some of the workshops because we wanted to know specifically if people were able to attend. And if not, we wanted to open up our waitlist to more folks. So getting those quick responses was super helpful. I don't think we would have gotten that via email. And then to be able to tailor our survey so that they only went to folks who actually attended was really helpful and allowed us to trust our results. The auto-reply feature made that possible, so if they said "they attended", we sent them a survey.
Q: Because this was also a live event, what, if any, logistical text questions came your way?


A: We actually set up a sort of menu for attendees. We had three things that they could text, "tickets" "workshops" or "more." We had auto responses setup for each of those that sent more information and directed them to the website or the right answers.
There were also people where we had more one-on-one interactions because they were asking questions rather than using the menu options, but it was nice to be able to quickly respond to them. We got some really nice responses too, I think because it felt more personal since there was someone else at the other end.

Q: So what does the future hold for Apartment Therapy and texting?

A: Right now, we're working on ramping up our weekly texts. This will be a very different context. It's not event-based, but a weekly digest for each of our sites. So that's something that we're working on promoting right now. We were able to grow that Small/Cool list really quickly because of the Eventbrite sign-ups. We required a phone number and we would text them through that. So I'm curious to see the sort of growth process for us for these weekly ones.

Q: Was this your first foray into text?

A: Yeah. This is our first foray, we hadn't used it before. We had been thinking about it a little bit and it was more of a commerce angle and I feel like now that other media companies are kind of starting to test it, we thought it was a good time to do it too.

Q: What was the onboarding experience like for you to get started with Subtext?

A: This event in particular was a bit of a bigger lift just because of the different elements going on. We had folks attending at different times that we wanted to send reminders to. So it's a little bit more manual in terms of just getting it set up. And then Wilson was very nice to do a lot of bulk uploads for us. That was probably the only tricky part for us, was just getting that setup. But once we had that running, it was really easy to use.
[Subtext note: Three Cheers for Customer Success Lead Wilson]

Q: If you were to give advice to someone who's curious about it, what would it be?

A: I think it was a really great system aside from the initial setup, which was complex mostly because we had people attending at different times. The system itself is really great for events specifically. I think that was a really helpful way for us to get in and just get used to the system and understand generally what our readers are looking for in text. I think just knowing that it's a really easy interface is helpful. It never felt like a big lift to go in and respond to people. It was always pretty seamless.
Something I noticed in general with texting is that when I go to most websites, I'm not able to find and sign up for text updates very easily. The signup is hard to find usually. When I hear about a really good SMS program, I go to sign up for it and I can't find it anywhere. I think a lot of sites can improve on this.
Q: Makes sense. What can we expect from you all in the future?
A: We are working to model a text campaign off of our commerce newsletters. We have a commerce team that puts together editorially angled stories that promote different commerce sites. So that's something that we're hoping to launch towards maybe the middle or end of Q3. I'm working on a text campaign for The Kitchn now which will be about cooking prep for the week ahead. [Update: launched - get those recipes!]

Thanks Hollis and thank you Apartment Therapy!
Interested in incorporating text into your next event? Reach out to set up a demo at hello@joinsubtext.com.
Tags: Use Cases, Journalists
Back to Blog