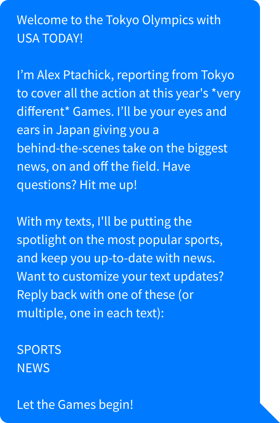 Alex’s campaign amassed thousands of subscribers over the course of the Olympics. People were drawn to her perspective of being in Tokyo in the middle of this historic event.

Promoting the Tokyo Olympics texting campaign began before the opening ceremony even began. USA Today led people to subscribe by placing in-line links with clear call to actions on their website. Several members of Alex’s team as well as the official USA Today twitter handle also promoted the texting service. 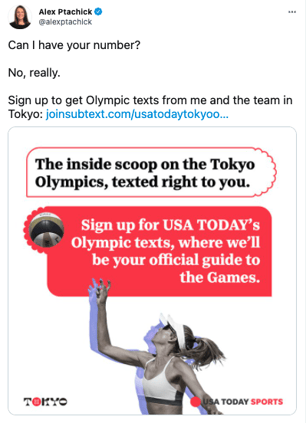 Alex tweeted that she reached her subscriber goal about halfway through the games. Her texts were friendly and conversational. She also let new subscribers know what they could expect from her texts and asked for feedback along the way. Once, she sent out a text trying something new: sharing the Olympics’ schedule of the day and asked people to let her know if they liked it. Hundreds of subscribers responded in approval.

Alex tweeted that she pivoted her plan as she learned what the subscribers wanted, “Some loved the behind the scenes access. Others really wanted breaking news updates, in the moment. People needed help finding where to watch favorite events. A few really just wanted to know if Team USA was winning the medal count. Many were interested in what I was eating!”

During the games she provided links to USA Today’s Olympic stories and after the games she encouraged people to subscribe for USA Today or one of their similar newsletters. 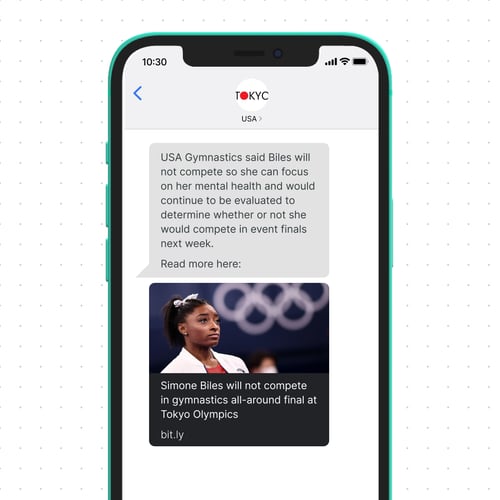 USA Today continues to leverage Subtext to provide newsworthy updates and important event coverage for their audience in a very personal way.

Want to build an audience around a big event? Request a demo today at hello@joinsubtext.com.

How CNET and Reviewed engage with thousands of shoppers via text

Everybody loves a good deal and CNET and Reviewed are texting their best finds straight to their...
Read More