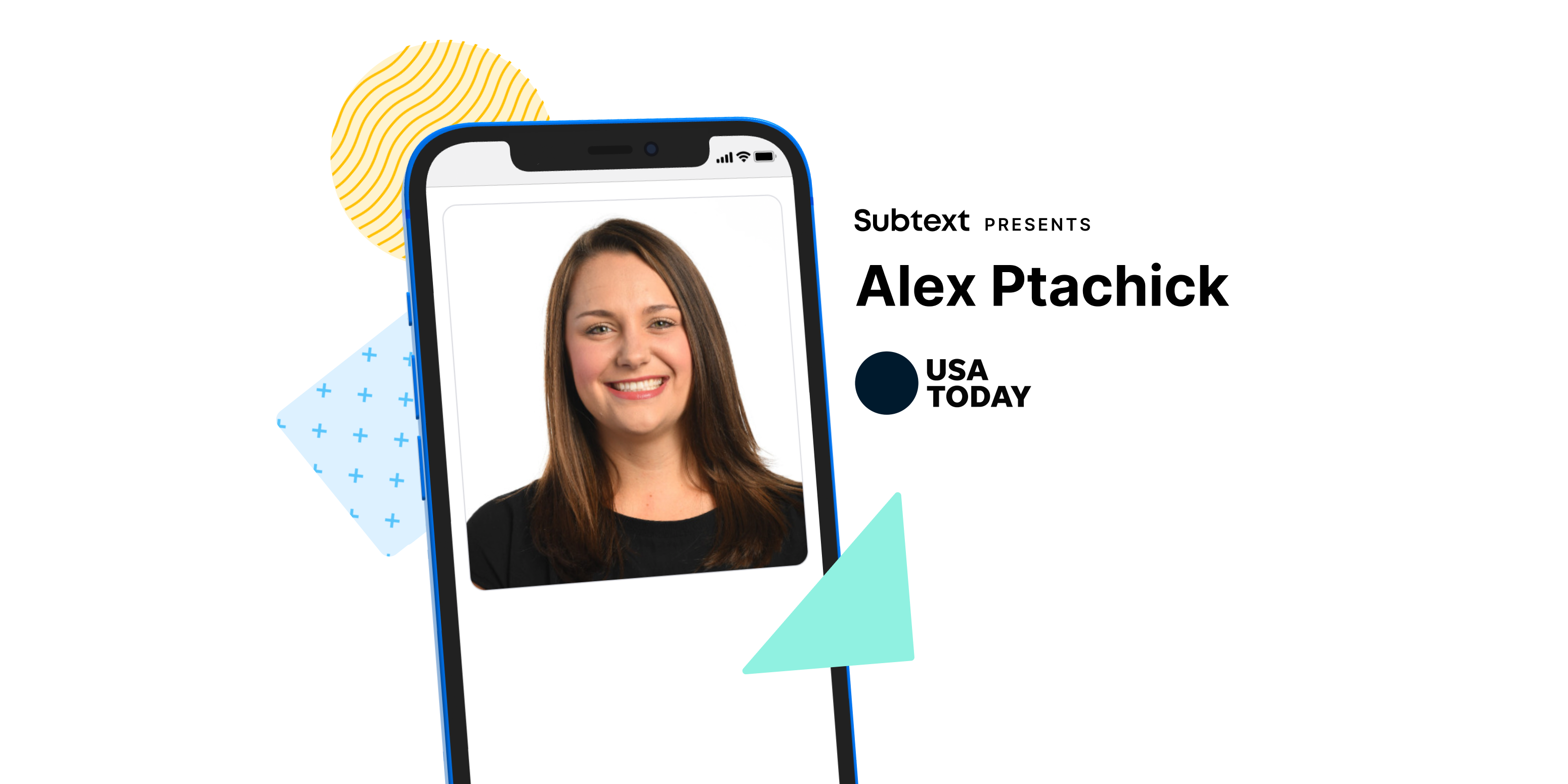 At Subtext, we're fortunate to work with amazing partners across media, sports, entertainment, events, politics, and more. We love learning from our partners to highlight the great work they're doing and to improve our own offerings. With that in mind, please check out this week's Q&A with USA Today's Alex Ptachick, discussing their Olympic text channels and their most recent use of Subtext which is a perk for USA Today subscribers only.

Q: Hi Alex. To start off, can you tell us who you are and what you do?

A: My name is Alex Ptachick and I am the Deputy Managing Editor of Audience at USA Today and work on creative innovative ways to connect the audience with not only our reporting but also the faces behind the reporting. It's something I've been doing for a few years now and texting is one of the easiest ways to do it.

Q: When did you start working with text? Was Subtext the first platform you used?

A: We jumped into text when I found out I was going to the Tokyo Olympics, and at the time our loyalty editor was really interested in some sort of campaign around the Olympics.  I previously worked in sports. I'd covered the Olympics before Tokyo. So it just really made sense for me to be the person to drive the text conversation.

Originally, we had thought it would be pulling in reporting from other reports that we have on the ground there. But with COVID, access just wasn't what it usually is. So we sort of had to pivot in real-time and started serving the audience exactly what they wanted, which was 'how can I watch these events' and 'can you give me a quick rundown of the day throughout the day?' So we went in with a vision and then I had to completely blow it up because we had very limited exclusive access.

Q: And overall, how did the texting play into your coverage? How did it feel?

A: It was so rewarding. I tell people all the time that texting is my favorite thing that I work on because it is genuine feedback. You definitely upset some people, but you can go back and forth just like you would with the friend over text to sort of like reason with them. I think I realized pretty quickly that digital tone I needed. For example, I noticed that in text, I personally use a lot of exclamation points. I'm not saying people have to do that,  but for me, it really did help, because I came off as myself.  And I tried to tell some jokes and at the sillier times given them a peek under the hood with photos, links to YouTube videos, and just tried to make every text great. It was all about making the tone of the text come through.

Q: That's great. I was actually going to ask: What is different from an editorial perspective about text. What's your approach to the medium?

A: Writing with voice is something we always tell people to do, but it feels weird sometimes. But I text with friends and family all day every day and I guess I'm just very comfortable in that space and I tried to incorporate some of my normal day-to-day texting vibes into Subtext. So for example, I use emojis. I use emojis all the time when I text and I was able to do that. I did stick to USA Today style in text. So I wasn't using certain abbreviations. I was capitalizing when appropriate. I tried to still make it look and feel like USA Today content but just had more voice.

A: For both Olympics [Tokyo and Beijing] it was 12 to 13 hours ahead. The time zone change was tough. My inbox would be lit up when I was sleeping. And so that was really stressful. We figured it out. We would have someone come in during normal EST hours and clean up the inbox and do replies. I guess I hadn't thought through that, like, I ask a question before I go to bed and I can't make people wait 12 hours until I'm like back and ready to start responding, because then it's like midnight to them.

Q: What if any feedback or experience, do you think the audience had?

A: Well, sort of along the lines of your last question about surprises, I was surprised and very delighted by the positivity. Public comments on every other social platform can be very hard to read. But in text, it turns into this personal two-way conversation between you and the individual seems to be really healthy. I loved to see how much people were enjoying it. I was getting tons of positive feedback and people were cheering me on, they'd say "keep going" and "you're doing a great job, so I decided to subscribe to this" and "your updates have been super so far." You know, I wasn't even soliciting the feedback every time but people were just offering it up which was really nice.

I think part of it had to do with the fact that it was private. And I'm not saying all I ever got was amazing positive feedback. I definitely got negative feedback. People are sometimes upset about spoilers, although I set the ground rules that we were going to be telling the news in real-time which include spoilers if you're on the east coast. But yeah, overall the feedback was excellent.

Q: Tell us about the new campaign that just launched and what its inspiration is.

A: We just launched a subscriber-only texting campaign with Sallee Ann Harrison. The idea is to have a conversation around a topic, particularly one of our premium pieces of content, which is a subscriber-exclusive piece of content every single day, and then also start bringing on some guests to host Q&As. So for example, if the topic of discussion for the day or maybe even for the week is the Ukraine war then we would bring on at the end of the week, a photographer and reporter to talk about the time they spent in Ukraine and take any questions from the audience. This is the first time we've walled off an experience for subscribers like this and we are thinking of it as a subscriber perk.

The whole Genesis of the subscriber-only experience was that we saw that people from the Olympics experience were hyper-interested in talking back-and-forth with the newsroom. The audience for it kept growing. I actually thought it was going to get smaller for the second Olympics because it was Winter, but it almost doubled in size. We wanted to figure out a way to convert them to paying subscribers. And a lot of them did convert, a chunk of them converted and some of them we are still working on converting. So I'm gonna re-engage them with this text-offering and say 'hey, you liked this experience for the Olympics? We have this link to this other general texting thing happening. You should come play in the space too and be a part of that and to do so you'd have to subscribe.' So, it's a win for USA Today in terms of revenue hopefully.

Q: What else, if anything, do you think is worth trying here?  If you're talking to a reporter or someone else in the space, what is the case or experience that you would say somebody could have with using text?

A: I think the immediacy is cool. We've tapped into Twitter and we're on Instagram, and we're in your Facebook feed. Text is the one really private space between a person and their closest friends and loved ones that I didn't feel like journalism had fully tapped into. And so now you can enter that space where the most intimate people in your lives are. I think that's exactly what we want to do. We want USA Today to be an intimate part of our subscriber's life.

It's a lot of work to run a texting campaign. And so we sorta just had to make a business decision that we can't pop these up for every single vertical that we have in the newsroom, but if we're gonna dedicate resources to this subscriber-only experience, we feel good about that because we're actually making money and also deepening that relationship with the audience.

Q:  Feel free to be brutally honest in this question. What can we be doing better?

A: More ways to manage the inbox. It's hard because I try to personally respond to almost every single message that comes in. And I just feel like that's something I promised to the audience and I want to live up to that expectation. So ways to bulk reply would be helpful.

[We have this on our radar and the product team is working on new ways to make managing the inbox easier. We also remind folks: You don't have to respond to every individual. Acknowledging that you're reading replies in a future broadcast often does the trick!]

A: Only thing I'd say is, like, I was really nervous at first to host a campaign. I was worried 'what if this flops? What do I do? What if like they hate me? What if this whole experience is just annoying to them because I'm texting them roughly three times a day?' And what I quickly realized is that I just have to listen to the audience and take every piece of feedback. So we did the Tokyo texts and then before we did Beijing we did a short gut check with the audience to see what they thought. It was really smart to use the audience to inform the second wave of Olympic texts and it created deeper fans by doing that because they really felt like they had a say in how things were going to go. So I would say, don't be afraid to try it out, and then don't be afraid to pivot.

To learn more about how to launch your own text community, reach out at hello@joinsubtext.com.

Tags: Use Cases, Why Subtext?, Journalists
Back to Blog

Hurricane Ida and its fierce category 4 winds have made its way towards Louisiana this past...
Read More