How Maren Morris is using Subtext to promote her new album

Grammy Award winning artist Maren Morris has always been dedicated to her fans. With the release of her third album Humble Quest, Maren & The Sony Nashville team wanted to find a unique way to break through the clutter and engage with her fans directly. Enter Subtext.

Maren & her team have launched an impressive campaign to promote Humble Quest. Let’s break down how Subtext was involved. 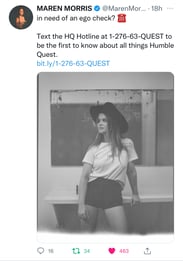 Before announcing her new album, Maren launched her first single and in conjunction, launched the Humble Quest Hotline. The hotline promised to provide exclusive updates on new music and generated hype for what was to come.

Once her album was announced, Maren included a

CTA in the welcome message to pre-save and pre-order her album across variety of music services from Spotify to iTunes.  Promotion across all her major social channels and pushing pre-orders led to exponential subscriber growth and album pre-sales.

Maren utilized the Subtext voicemail feature that allows her to record a personalized voicemail. Fans are also able to leave voicemails for Maren. The Nashville Sony team has access to all of the fans voicemails allowing them to create additional fan generated content.

The hotline's phone number is featured on exclusive album merch. Branded t-shirts and long sleeves are now being worn by fans all over the world promoting Maren's Subtext number. 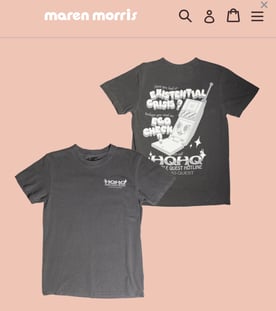 We're so excited for the album to drop on March 25th!

Reach out by emailing hello@joinsubtext.com to learn more about unique ways to incorporate Subtext into your album promotion.

It started the way so many stories do in 2022: a tweet. A little easter egg among the many posts...
Read More

The Advantages of Opt-In Marketing

We have an exciting product update!
Read More